After a few false starts in mass media the President’s draft law ‘on oligarchs’ was passed to the Verkhovna Rada. Volodymyr Zelensky has already begun threatening the MPs to put the question concerning oligarch status to an all-Ukrainian referendum. This will happen if the ‘mono-majority’ does not support its President in the fight against oligarchs. 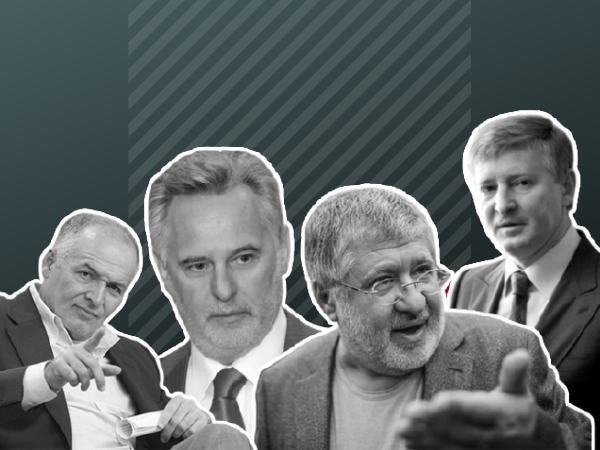 Perhaps the provisions of this law are very painful for oligarchs and the President is waiting for vigorous resistance from them… or he is not? Let us look closer into the issue.

The President himself have been saying many times that Ukrainian oligarchs would vanish soon, as though he forgot how in a month after his inauguration he was trying to involve the oligarchs in the infrastructural projects in Donbas.

After that meeting, the whole Ukraine learnt that Ihor Kolomoyskyi ‘could paint a few stalls’ and understood how ‘eager’ the oligarchs were to support the President’s ideas of this kind.

Later on Volodymyr Oleksandrovych decided to involve the oligarchs in funding of the fight against COVID-19.

This time the idea failed again and almost a half of the coronavirus fund was suddenly paved over with the new asphalt of the President’s next media project.

They took money for combating the coronavirus from the other budget lines. The State Agency of Automobile Roads of Ukraine, the Social Policy Ministry, the Internal Affairs Ministry and partially the Health Ministry got them back (but education, culture and regions did not receive any compensation). The President’s statements that the oligarchs would share their money looked ridiculous.

It is quite possible to say that such twists and turns of the relationships between the President and oligarchs lead to the appearance of the draft law ‘on oligarchs’. However, the variant of the draft law, which the President passed not to mass media but to the Parliament, displays the absence of the aim to combat oligarchy as phenomenon or status.

They just want to assign an oligarch status to somebody and demonstrate heroic confrontation with the embodiment of ‘global scourge’. Consistent elucidation of the struggle against a specific ‘Oligarch’ in mass media might mobilize the voters pretty well. Only this can explain the logic of the article 5 standards, which empower the National Security and Defence Council (NSDC) to label somebody as an oligarch.

The President also has the right to introduce new members to the NSDC; it allows him to have two thirds of loyal NSDC members, which are essential for taking decisions. The President also enacts the NSDC’s resolutions. It is clear now that the President has total control over the issue of oligarchs in Ukraine.

Moreover, those considered oligarchs and listed in the special register (which is also controlled by the NSDC) are not facing any serious problems. Article 7 of the president’s draft law explains that those labelled as oligarchs will face the ban to donate to political parties and acquire businesses during big privatization campaign.

Unfortunately, there are hundreds of lawyers in Ukraine protecting their clients from being associated with the supporting of political parties or certain businesses. The draft law on oligarchs provides no tools for improving this situation.

The ‘oligarchs’ will also have to submit ‘electronic declarations’ on their assets, this should also become a source of income for lawyers and accountants.

Perhaps the President is going to put obstacles not to ‘oligarchs’ but those whom they are contacting for solving their oligarch issues? One could come to such a conclusion having read the article 8 standards, which is obliging public officials who have communicated with the registered oligarchs to submit a declaration on such contacts. However, this measure is far from fighting with oligarchs; it may only help control public officials.

Is it not possible the officials will avoid declaring their contacts with oligarchs? If it is, there should be some way of controlling them. It is necessary to monitor with whom they are communicating in 24/7/365 mode, tap their phones, monitor their internet traffic, watch them at all times. It sounds absurd.

Let us see now who can be labelled as an oligarch. According to the criteria outlined by the proposed law, an oligarch is a person who participates in political life, (b) has considerable influence over mass media, (c) is an end beneficiary (owner) of a business that claims a monopoly (or dominating) status on the domestic market, (d) claims ownership to the assets that totals over a million of living wages as of January 1.

In 2021, the living wages for a capable of working person is 2,270 hryvnias per month. One million of living wages is equal to 2,270,000,000 hryvnias or 83,180,652 US dollars according to the NBU currency exchange rate. The sum is ridiculous within the scale of the problem. It seems the sum was deliberately set too small so that it could allow pretending that the combat against ‘smugglers’ is actually the combat against ‘oligarchs’. Anyway all those ‘oligarchs’ will be nominated by the NSDC and approved as such by the President.

This assumption is strengthened by the two other criteria for getting in the ‘register of oligarchs’ – partaking in political life and having considerable influence over mass media.

Though the first criterion is seen as the direct attack on Poroshenko (and it is undoubtedly so) it is so broad that anyone can meet it. Article 3 of the draft law explains that ‘an individual is fulfilling the criterion of partaking in political life if he/she is funding the activities of a political party, political agitation, organization of meetings or demonstrations making political demands’. Therefore, one can just print a placard for a meeting demanding someone’s resignation and fulfil this criterion as the amount of such political parties/events funding is not specified in the draft law ‘on oligarchs’.

The issue of ‘considerable influence over mass media’ is far more complicated.

According to the President’s draft law, ‘mass media’ are the printed and electronic mass media, information agencies, broadcasting channels. Unfortunately, the definition of the term ‘electronic medium’ given in the bill looks quite vague. It was not taken from the ‘Law of Ukraine on Television and Radio Broadcasting” but invented by the team, which created the draft law ‘on oligarchs’. Hence, the meaning of the notion of ‘electronic medium’ is explained in the following way: ‘a means of disseminating in electronic form of the periodically updated information for an unidentified circle of subjects via the Internet, which has a permanent specific name.’

Happily, it is specified in the law that social media accounts are not considered ‘electronic media’. Unfortunately, there is no such clarification regarding websites. Thus, the website of the ‘Studio “Kvartal 95”’ might be considered an ‘electronic medium’, which is ‘disseminating in electronic form the periodically updated information for an unidentified circle of subjects via the Internet, which has a permanent specific name’, as well as most of the websites in the Internet might…

The vague definition of the ‘oligarch’ given in the draft law (ownership to the assets that totals over 83 million dollars and partaking in political life through meetings along with ‘considerable influence over mass media’, the definition of which is also quite ambiguous) means in practice that big and not too big businessmen who are donating to public sector might be listed in the register of oligarchs. Of course, the NSDC and the President will form the register.

It is also necessary to underline that the NSDC and the President will be empowered to remove the names of oligarchs from the register (on the application by the latter).

Finally, we have a law, which is not solving the issue of oligarchs in Ukraine. On the other hand, such a law allows the President to control those considered oligarchs without creating any obstacles to them.

Perhaps the President’s team understands that the law is useless and should be rewritten from scratch by the Verkhovna Rada, which is going to take pretty much time. That might be the reason for Volodymyr Zelensky’s threats to put the law to referendum.