Attack on ‘Bukvy’ reporter: what really happened and what can it lead to

On Saturday, August 14, ‘Bukvy’ journalist Oleksandr Kuzhelnyi was reporting from a rally ‘Stop the capitulation’, which brought together different nationalist groups to protest against recent repressions targeting Ukrainian nationalists and betrayal of Ukraine’s interests. When the rally ended, Kuzhelnyi was surrounded and assaulted by a group of angry protesters who demanded the ‘Bukvy’ reporter to delete all the photos he had taken at the event.

The protest was not peaceful from the very beginning. Staged at the Ukrainian president’s residence in Bankova Street, the gathering  soon turned violent – clashes erupted after the protesters refused bag checks demanded by the police. 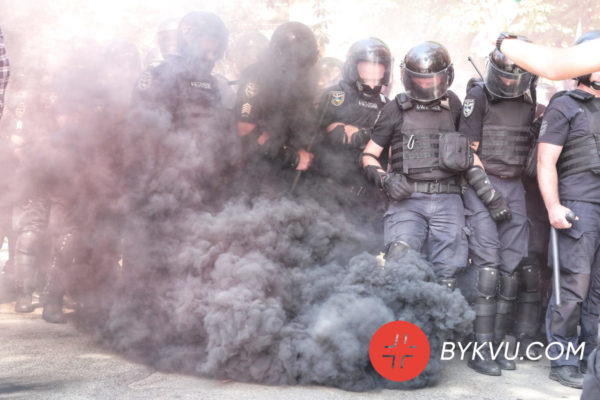 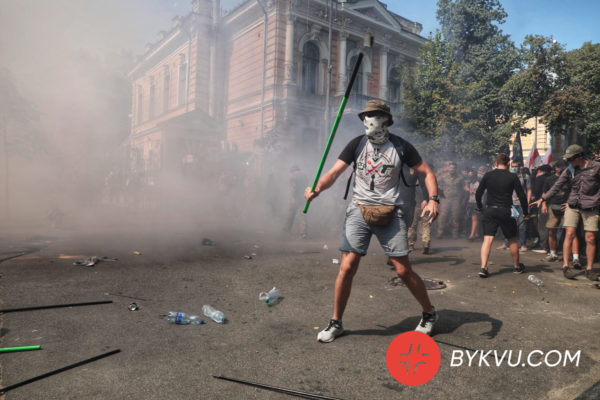 According to Kuzhenlyi, who was covering the event he was confronted at the rally by a balaklava-wearing protester who angrily demanded him to leave. After the end of the event, Kuzhelnyi was overtaken by a group of people, who in an aggressive way demanded the removal of photos taken during the rally. The reporter showed his journalist ID, alluding to the attack on the journalist. However, he was kicked and punched.

The attackers recorded themselves abusing and attacking ‘Bukvy’ reporter. Later into the day their mobile phone footage emerged in the net.

Oleksandr Kuzhelnyi noted that one of the attackers, before using force against him, mentioned the attack that took place on July 21 near the court.

Upon learning of the incident, ‘Bukvy’ called the leader of the National Corps, Andriy Biletsky, to investigate the situation. The politician arrived at the scene, helped with the ambulance and police, and also assured that the attackers were not members of his organization and promised that the perpetrators would be found and punished.

Later, the attackers apologized to Kuzhelnyi under the close supervision of Biletsky. They claimed they had beaten the reporter because of ‘received false information’.

Pechersk police department opened an official probe under art. 345-1 of Ukraine’s Criminal code on charges of violence against journalist that carries punishment of up to 5 years in prison, says Kyiv police in a statement.

According to Oleksandr Kuzhelnyi, he spent two hours in the police station: officers compiled a report and attached photo and video evidence to the case.

In particular, ‘Bukvy’ published an investigation in which they analyzed the activities of bots on Facebook, working in the interests of former Prime Minister Volodymyr Groysman. Following the publication, the Facebook administration exposed a network of bots linked to MP Andriy Derkach and ex-PM Volodymyr Groysman.