Ukrainian drift racer Oleksandr Grynchuk states that Red Bull staged filming at Sophia Square in Kyiv to promote the brand, as well as to celebrate Ukrainian Flag Day and Independence Day. Moreover, he claims that the company always cleans up after such projects. 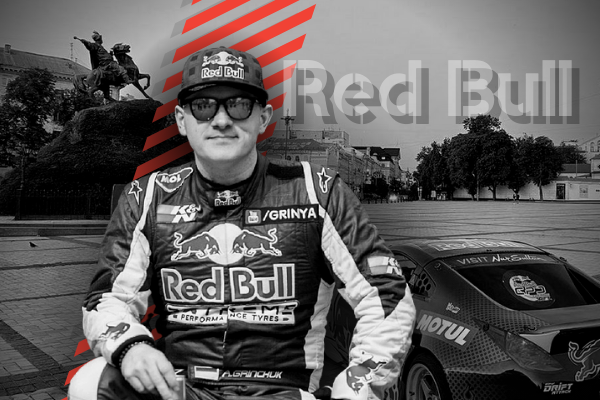 Commenting the development of the situation with Sophia Square drift, Grynchuk suggests on his YouTube channel ‘own version of events without attempts to invent excuses’.

‘My contract stipulates that I must take part in some projects, one of which was a pair drift in the center of Kiev with a Red Bull colleague from Ireland, European vice-champion Conor Shanahan. The purpose of the event was to promote the brand and shoot a video to mark Ukrainian Flag Day and Independence Day’, the racer says.

According to Grynchuk, shootings of this type begin as early as possible to create as little inconvenience as possible for pedestrians and other road users. The preparation process began at 5:00 am. The drift started at 7:30.

Grynchuk notes that ‘once an hour’ several police patrols called by residents came to Sophia Square, but they ‘almost immediately left’.

After that, bloggers and journalists from major TV channels came. However, there was no outrage. Moreover, they took part in the drift.

In the end, the racers made the smoke image of the Ukrainian flag, finished filming and began to pack equipment.

Grynchuk stresses that after that – ‘as Red Bull always does’ – a cleaning company allegedly came to the square. Cleaning of the location had to take 3 days.

The drifters moved to another location, and ‘in 3 hours they were stunned by the reaction of bloggers and politicians’. Against the background of news of illegal drift, the police arrived at the NoMotors site, where the racers and cars were.

Grynchuk claims that for a long time they were allegedly not allowed to leave the site, which restricted their right to freedom of movement. However, ‘after a small scandal, the police interrogated him as a witness’.

The police also called tow trucks to pick up cars to  the penalty area. Grynchuk insists that the cleaning company hired by Red Bull cleaned everything, as promised, in 3 days.