Oksana Markarova has been thrown back into the spotlight amid reports of the disrupted trip of Ukrainian lawmakers to Washington and their complaints about the snub they got there from the Ukrainian ambassador to the US.  'Bukvy' looks back at three missteps that marred the reputation of the former finance minister.

Few would argue that Oksana Markarova stands out on the Ukrainian political scene dominated by Volodymyr Zelensky’s team.

Known as an investment professional, she started her ascend joining the US finance consulting firm after graduation from Indiana University.

Her foray into Ukrainian politics came in 2015 when she was appointed a finance deputy minister.  Three years later, Markarova stepped up to the position of  the finance minister.  She managed to retain her job after Zelensky came to power in 2019, promising  arrival of  ‘new faces’ intoUkrainian politics.

At about the time, she found herself embroiled in a scandal after  Radio Liberty claimed then finance minister and her husband Danylo Volynets used a questionable scheme to snatch assets of collapsing Aktiv Bank they bought in 2013  from Kluev brothers, who fled the country amid Maydan protests.  The insolvent bank still owned a plush  4,000 sq.m. property in Kyiv center, located at  3, Borysoglibska St.

According to Radio Liberty investigation, the building eventually passed into the hands of Oksana Markarova after a series of deals involving companies affiliated with the finance minister and her husband.

The deal raised uncomfortable questions when it became known that the property was earlier pledged by Kluev brothers as collateral for a 38 million euros loan their  Ukrpidshypnyk company secured from state-owned Ukreximbank.

It is against the law to sell a property pledged as collateral if you have no lender’s consent.

State litigation records show the lender did agree to  the deal providing the seller would stick to collateral value and get  permit from  National Bank of Ukraine. Unsurprisingly, neither of the provisions were met.

Markarova staunchly denied her involvement in the scheme admitting though  that purchase of Aktiv bank was her ‘business mistake’.

The litigation over the disputed deal hasdragged for several years. In 2021,  The Supreme Court ruling scrapped the appeal of Ukreximbank in the case denying its title to the pledged assets.

At the time, Oksana Markarova cemented her position in the government and pulled off quite a feat  outlasting three Ukrainian prime ministers – Arseniy Yatsenyuk, Volodymyr Groysman, and Oleskiy Honcharuk.

When the latter was ousted from the government, Markarova was tapped  as his most probable replacement.

In never came through with some insiders claiming leaked ‘Honcharuk tapes’ played a role in the snub. In those tapes some of the Ukrainian cabinet members were heard discussing how ‘primitive’ Zelensky’s understanding of economic processes was. Markarova was allegedly present at that discussion.

Then came the news the Ukrainian president  named her a new ambassador to the US, which left many perplexed given Zelensky’s compulsive desire to weed out all of Petro Poroshenko appointees.

Critics were quick to point out she had no prior experience in diplomacy and would probably need to  fall back on her old business connections in the US.

Few would call her new role an ‘exile’. Zelensky  offered her the job in early 2021, a year after Honcharuk tapes controversy and his subsequent removal  meaning that leaked unflattering comments hardly damaged relations of the president and Markarova.

Undeniably, Washington is now a key strategic partner of Kyiv. As soon as Joe Biden won the presidential elections, Ukrainian government set down to mending fences with the US administration. The relations were strained following the fallout from Andriy Derkach tapes and the scandal that saw Trump’s lawyer Rudi Giuliani urging Zelensky top officials to continue the probe into Hunter Biden’s dealings in Ukraine.

As a new ambassador to the US Markarova was tasked with a challenging job – Kyiv wanted to make amends with Washington for the scandals and renew a dialogue.

The former investment banker proved a skilful troubleshooter. Markarova did a damage control  getting  Zelensky a meeting with Joe Biden while the US government confirmed its commitment to  support  Ukraine in the war conflict with Russia.

The two countries seem to have overcome misunderstandings that strained their relations in 2019-2020.

Last month,  Oksana Markarova came under scrutiny once again  after Ukrainian opposition MPs complained  about her efforts to disrupt their visit to Washington and block their meetings with the US officials.  To add insult to injury, she found time to meet another group of Ukrainian lawmakers  whose ‘opposition’ to Zelensky’s government is open to debate. 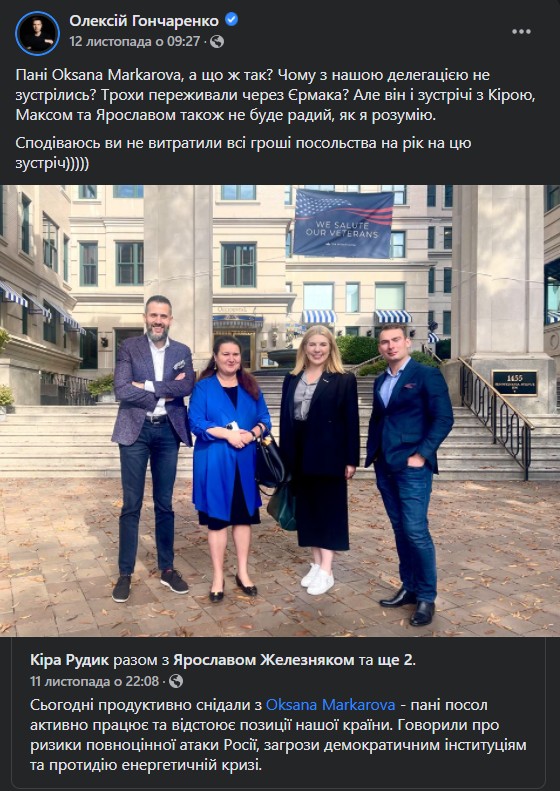 The incident shows that Zelensky and his aides will keep utilizing her talents for questionable  diplomatic assignments that eventually can prove damaging for reputation of the eager ambassador and Ukrainian diplomacy.

Tags: ambassador to the US, Oksana Markarova, Volodymyr Zelensky