17:22 First Russian troop goes on trial in Kyiv over killing of civilians
16:38 Russian troops dig in at Svatove and Starobelsk ahead of Ukraine’s summer counteroffensive, – Luhansk governor
14:13 Russia’s rushed effors to restore water supplies in Mariuopol can have disastrous results, – city council
12:29 ‘He has been at the front-line since the first days’, Story of Ukrainian celebrity chef who became military cook in Zaporizhzhya trenches 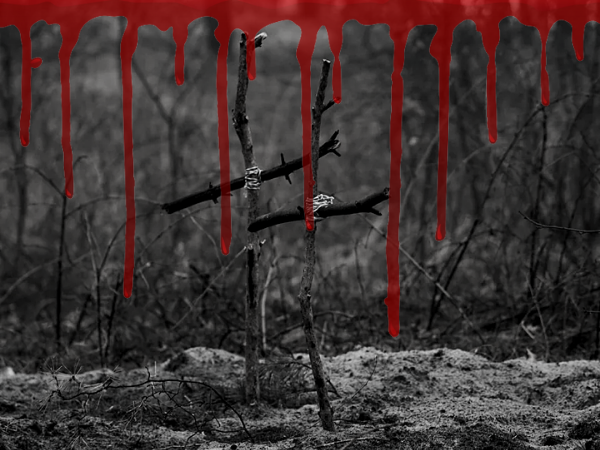 The news of the Ukrainian military retaking the city came on April 1 when deputy defense minister Hanna Malyar announced Kyiv region was liberated from Russian aggressors.

Bucha was understood to be among the hardest hit as fierce fighting in this area went for almost 4 weeks.

When Ukrainian military and journalists entered Bucha, what they saw was horrific scenes of the carnage and devastation. The city was littered with battered cars and burnt military vehicles, and, most shockingly, with hundreds of bodies with bound hands and signs of torture. Soon emerged the first accounts of survivors and witnesses who revealed stories about raped women, killed children, and tortured civilians. 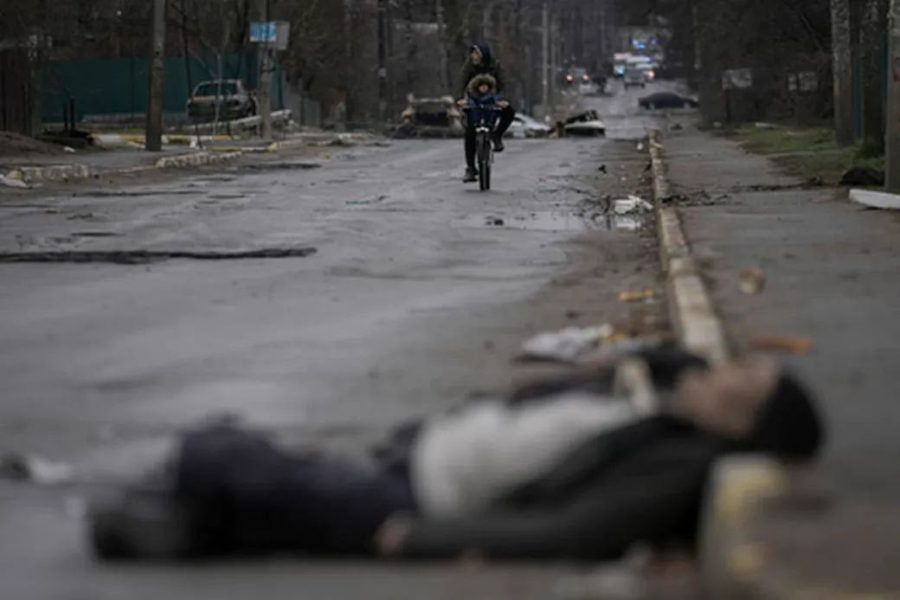 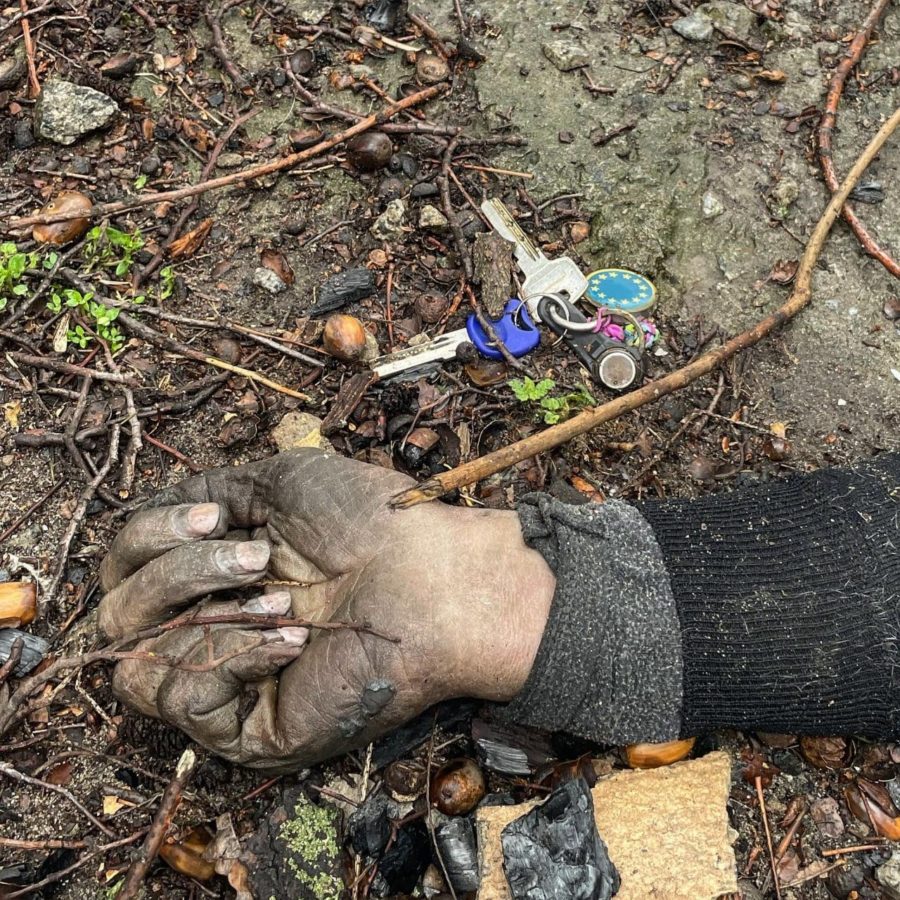 The image of a man who was tortured and thrown away by Russian troops. 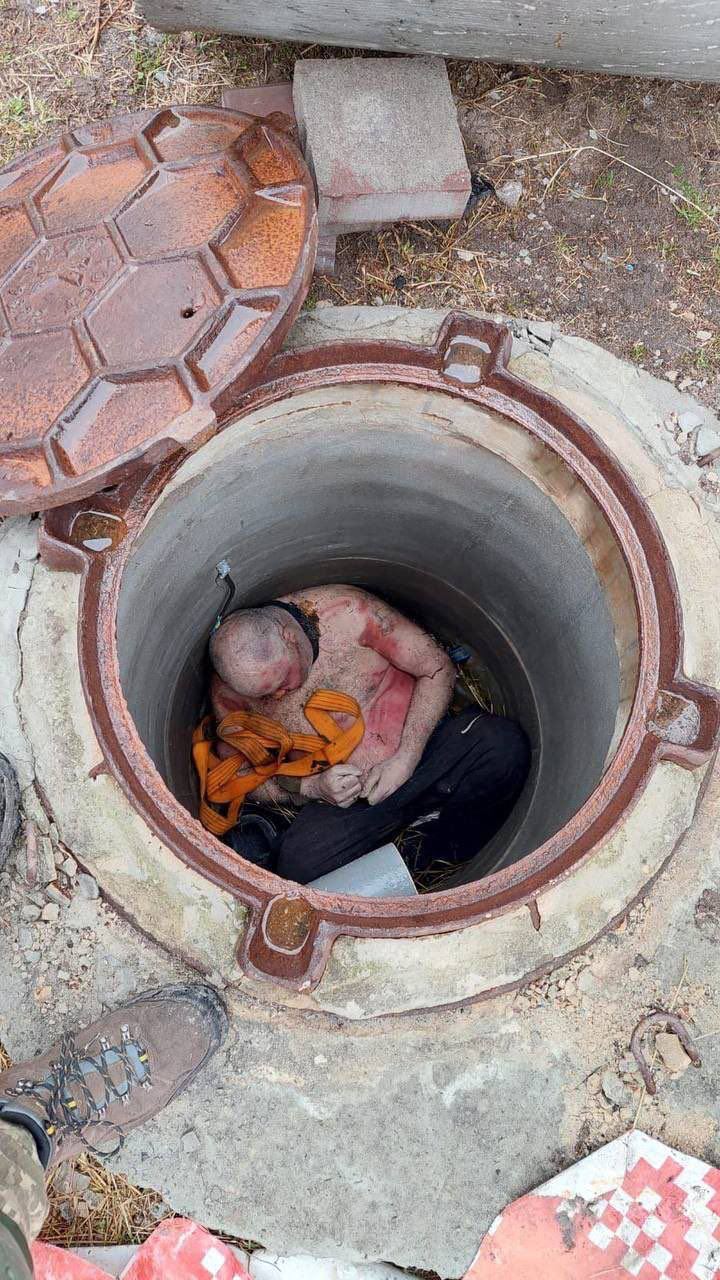 CNN reported a story about a mass grave in Bucha where some 300 people were found buried, and most of them, according to city mayor Anatoliy Fedoruk, were civilians. The discovered site drew a crowd of people trying to find their family members and neighbors that had gone missing. 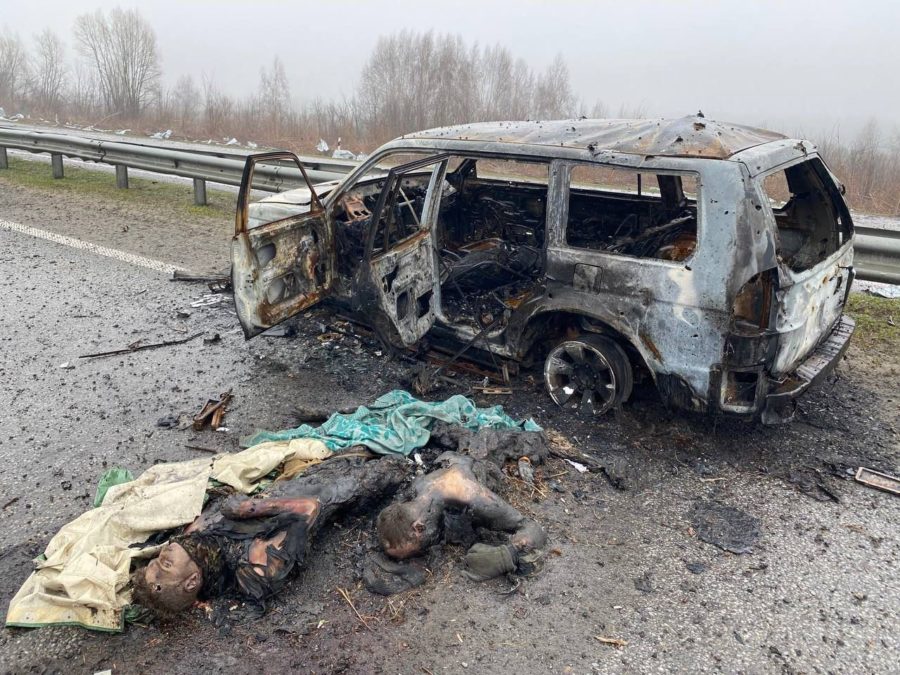 The next day the chilling images of Bucha massacre dominated the front pages of news outlets across the world. 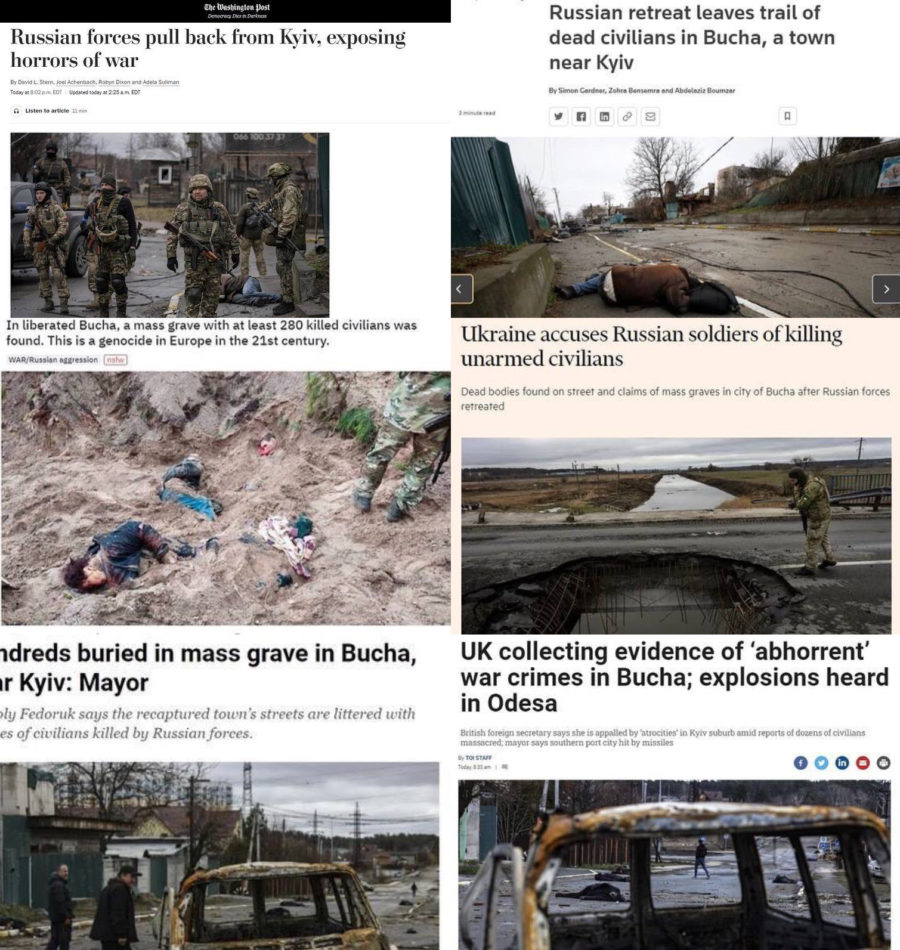 Ukrainian presidential advisor Mykhaylo Podolyak called it a ‘planned genocide’, adding that mobile cremation machines brought by Russian troops to Ukraine were set to be used to cover mass killings of Ukrainian civilians 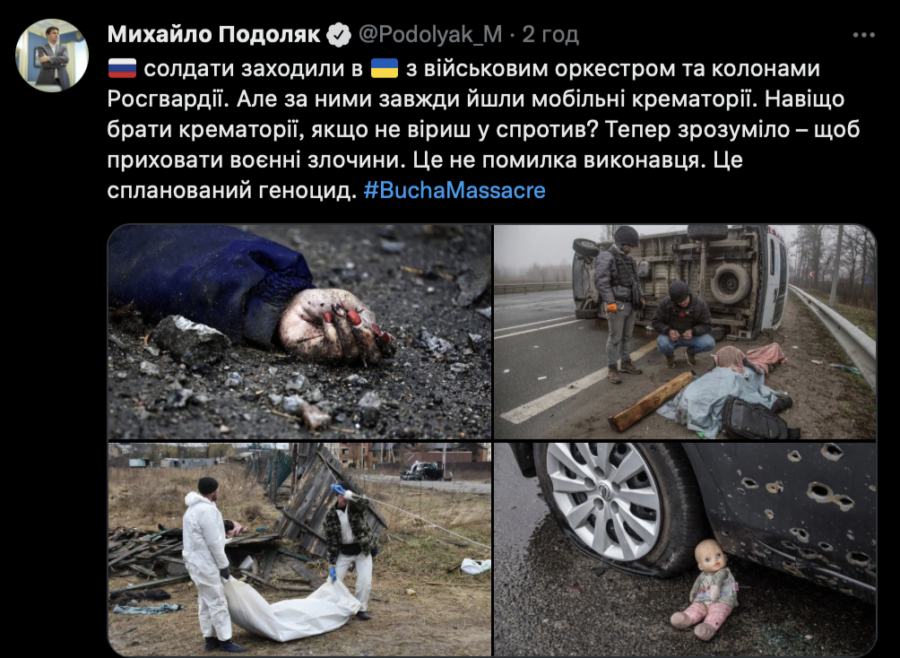 Former Ukrainian president Petro Poroshenko called for an urgent meeting of the UN Security Council and the UN Human Rights Council to bring to light evidence of the genocide staged by Russia in Ukraine. He also recruited a group of lawyers to collect evidence of the war crimes of Russian troops in Bucha that will later be part of a lawsuit against the aggressor state.

Bucha massacre was deliberate. Russians aim to eliminate as many Ukrainians as they can. We must stop them and kick them out. I demand new devastating G7 sanctions NOW:

In his video address following the revelations of the carnage in Bucha, Ukraine’s president said his government will create a ‘special mechanism’ of justice in Ukraine to investigate the war crimes in Bucha so that all those who committed them were held accountable. Such a ‘mechanism’ will require a ‘join work of national and international experts: investigators, prosecutors and judges.

‘Your culture and human features perished together with the Ukrainian men and women to whom you came,’ said Zelensky.

The sickening scenes of mass graves and murdered civilians drew wide condemnation from the world.

President of the European Council, Charles Michel, said he was shocked by ‘haunted images of atrocities’ by Russian army in Kyiv liberated region, and assured the EU will help to gather evidence of the crimes ‘for pursuit in international courts’. 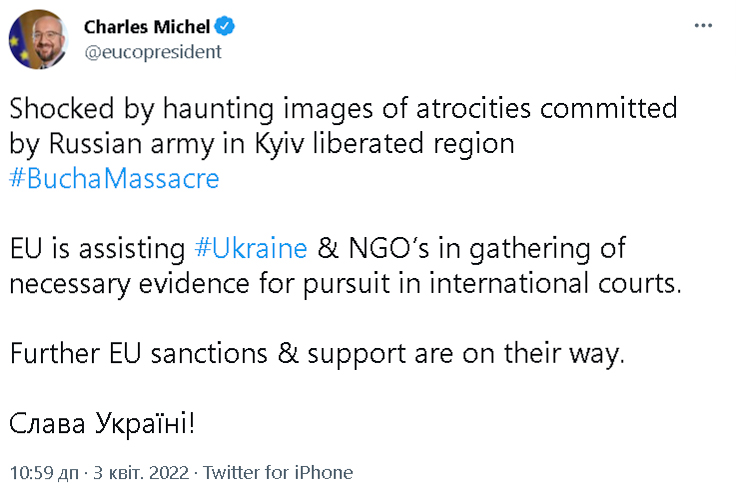 Israel’s ambassador to Ukraine condemns the apparent massacre of civilians in the Kyiv suburb of Bucha.

‘Deeply shocked by the photos from Bucha. Killing of civilians is a war crime and cannot be justified’, tweets Michael Brodsky.

Deeply shocked be the photos from #Bucha. Killing of civilians is a war crime and cannot be justified. #UkraineRussiaWar #Ukraine

Russian army of mass murderers retreat from Bucha reveals full scale of atrocities. We can only imagine what is going on in other occupied territories. No other way around – buying 🇷🇺 oil&gas is financing war crimes.

Russian army of mass murderers retreat from Bucha reveals full scale of atrocities. We can only imagine what is going on in other occupied territories. No other way arround – buying 🇷🇺 oil&gas is financing war crimes. Dear EU friends, pull the plug. Don't be an accomplice.

The British leader promised to ‘starve Putin’s war machine’ and step up ‘sanctions and military support’. 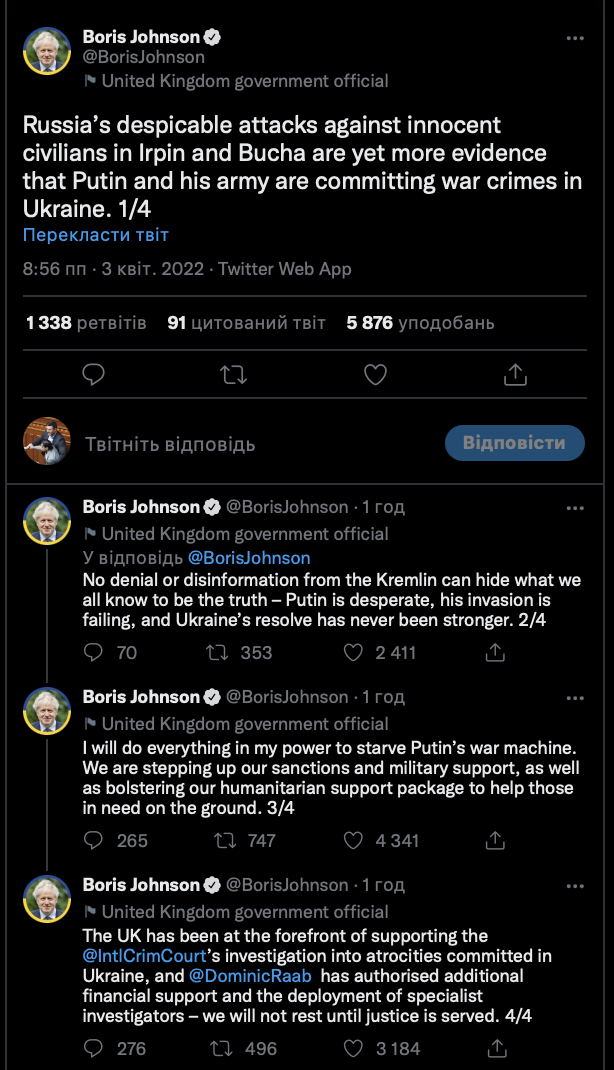 I am deeply shocked by the images of civilians killed in Bucha, Ukraine. It is essential that an independent investigation leads to effective accountability, he wrote on Twitter.

‘What happened in Bucha demands a new round of sanctions and very clear measures’, Macron told France Inter radio on Monday, adding that there were ‘very clear indications of war crimes’. 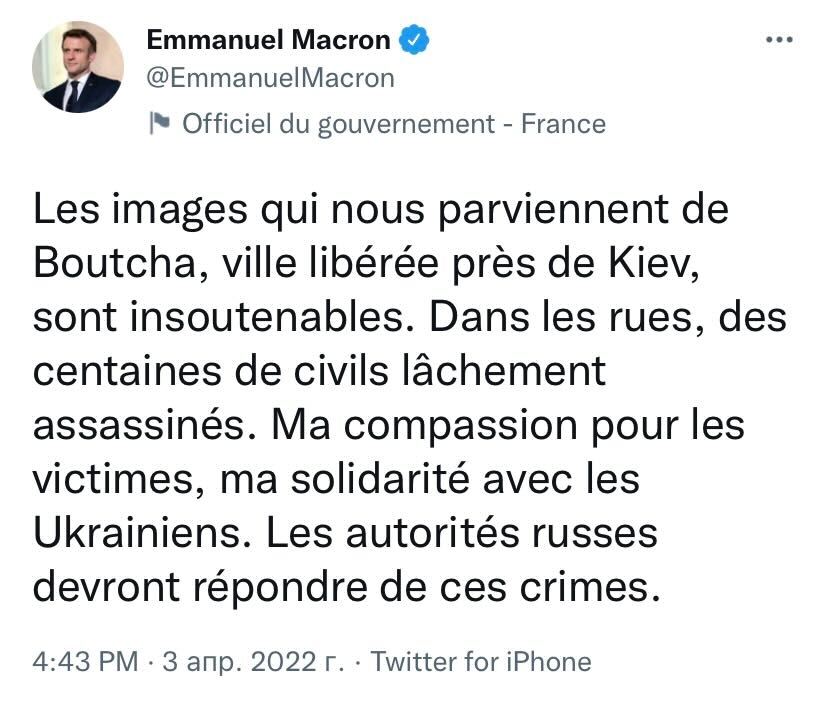 Polish president Andrzej Duda joined other world leaders in condemnation of Russia’s war crimes arguing that criminals must be brought to justice.